Origin of the Name

The inn, which has twenty rooms and two restaurants, has been located in the center of Manchester Village at the corner of West Road, Seminary Avenue, and Main Street since the early 1960’s when Wood and Joan Cornell decided to come here from New York State to open a bed and breakfast.  Over the next 40+ years, the inn has changed ownership three times, but retained the name The Reluctant Panther Inn & Restaurant.

The Reluctant Panther — it’s not a name that makes a lot of sense to most visitors, but it’s rooted in Vermont history.

Head south to Bennington (about 20 miles down Route 7) where, across from the David Robinson house near the Bennington Monument, depending upon the season of your visit and the fullness of the foliage, you may be able to see a gleam of bronze.  It’s a statue of a snarling panther, a Vermont symbol that marks Monument Avenue’s most historic ground. The statue faces west, towards New York State in defiance of the New Yorkers’ vigorous dispute over New Hampshire’s rights over the region—a dispute that was the source of most of Vermont’s early troubles.   At the Green Mountain Tavern, which stood on the site until 1897, Ethan Allen’s Green Mountain Boys met and organized their resistance to the hated New Yorkers.

The panther, which had defiantly continued to roam the mountains of the region despite the encroachment of humans—first native and later, European—was an ideal symbol of the attitude of Vermonters who wanted neither the interference of the King or their neighbors to the east and west.  In Vermont lore, the panther stood for independence and ferocity in the defense of the home territory.

But why Reluctant?  Fast forward almost 200 years to the early part of the 1960’s when the Cornells decided to convert a 100+ year old building to a bed and breakfast.  Joan, who was born in England, was curious why the panthers in the mountains were seen only very rarely.

“With all the people around,” her husband said, “they’re reluctant to come down out of the mountains.”

“Hmmm.  Reluctant panthers,” replied Joan.  And the name of a new Vermont institution was born.

History of the Buildings

The Main House as it sits today was constructed in 2006 following the devastating fire of October 29, 2005.  The fire had utterly consumed the original building, constructed in 1850.  This was the same building that had been converted into a B & B by the Cornells in 1962.   The original Main House building was actually constructed on the lot across West Road from the present-day Panther.  In 1897, the widow of a local businessman—the original editor of The Manchester Journal—decided to build a library in his honor at the corner of Main Street, West Road, and Seminary Avenue.  The only difficulty with this plan was the house that stood in the way.

Local lore has it that the house was simply put on wheels and dragged across the street to the location that it held for more that 100 years until it was destroyed by fire on that fateful Saturday morning.  The new construction of 2006 re-oriented the building so that a new main entrance is now on the East side facing the Mark Skinner Library rather than the South side.  The South face of the new building is identical in its design to the original—with the notable exception of the color.

The Story Behind The Reluctant Panther Color Scheme

Once the Cornells completed their renovations (about 1964) and got down to the business of running an inn and restaurant, Woody observed that few people traveling along what was then Route 7 (Main Street) were noticing his place.  It was all, he decided, a simple matter of attracting their attention—so he set out to do just that by painting the structure a brilliant purple and finishing it off with bright yellow shutters.  Needless to say, lots of people took notice—including the village elders, who promptly undertook a new regulation calling for architectural review and approval of all external design changes for buildings within the village limits.   But it was too late, of course, for the now-purple Panther was grandfathered, and it remained a remarkable landmark in the village for the next forty years.

In fact, when the reconstruction plan was presented to the Village Elders in 2005, several of them indicated strongly that they would have liked to retain the purple color since it now had sentimental, if not historical, value.  While the new Main House structure isn’t painted entirely purple, the color has been retained in numerous aspects of the building—including the shutters, doors, and some interior decorative highlights.  At the same time, the out-buildings have been re-painted from their original white with green shutters. 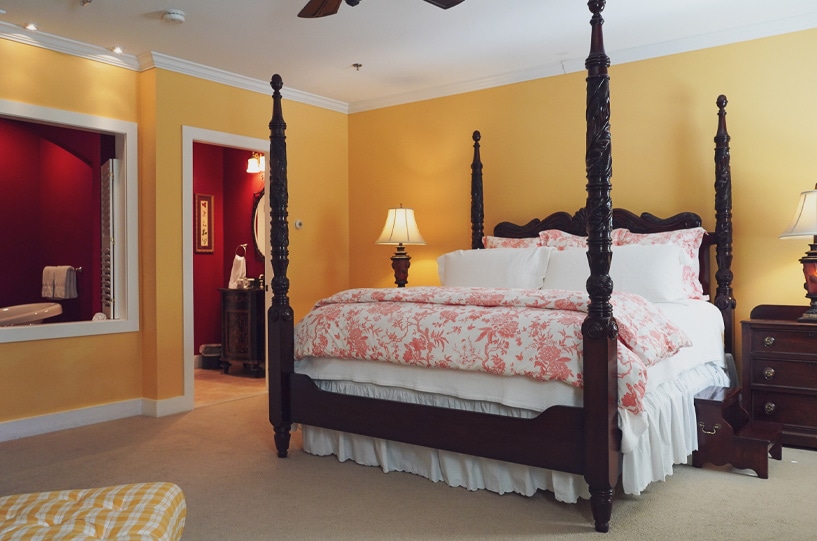 The Reluctant Panther offers 4 categories of accommodations: Superior Rooms, Deluxe Rooms, Junior Suites and Deluxe Suites. All of our rooms & suites have one King or Queen bed. 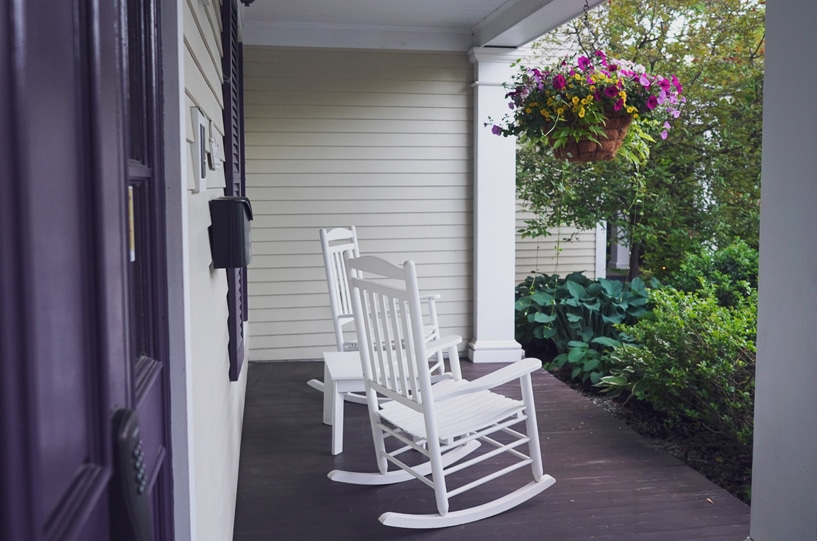 GETTING READY FOR YOU

at The Reluctant Panther

The Main Dining Room features the panther’s renowned gourmet cuisine and offers a sophisticated dining experience that is among the highest rated in New England.